There’s a saying that goes “why buy the cow when you get the sex for free?” Or something along those lines. Well it seems like plenty of people are pretty keen on buying themselves a bovine with a lot of hoo haa recently on the Internet regarding the gay marriage debate. One minute I’m chortling at totally inappropriate memes and the next I’m seeing so many equals’ signs I thought I’d dropped acid at a math convention and was losing my shit.

Oddly enough, I feel the same way about marriage as I do about homosexuality itself – I’m pro-choice. I don’t want to bum you and you don’t want to bum me (you probably do let’s be honest) but I’m happy for everyone else to have the freedom to bum (or not to bum) anyone they choose. So whilst I personally don’t care to be married any time soon, I’m not fussed if other people would like to do so – gay or not. People should be free to do whatever they damn well please as long as it’s not harming anyone else. Hence why I’ve never understood the anger towards gay people, I mean isn’t screwing like one of the only things we can do as humans that doesn’t affect anyone else? How does two dudes doing pushups in long grass or a couple of lesbians scissoring until their thighs chafe affect your life?

I’ve never really understood the big deal behind the ritual of marriage either so I was kinda surprised to see how strongly so many other people on the Internetz felt about this hot issue. So let’s delve into this topic a little bit deeper shall we?

A History of the Ball and Chain

The first recorded evidence of marriage contracts and ceremonies dates back to over 4000 years ago in Mesopotamia (which used to be Iraq before America shelled the joint for its oil). Back in those ancient times the whole idea of marriage was to preserve your family’s power and get some new goodies into the bargain. Kings and other various movers and shakers would marry off their daughters to forge alliances, procure land and produce legitimate heirs. Even amongst the plebs women had little say over whom they married. The main purpose of marriage at the start was for the blushing bride to fart a few fetuses’ out of her womb, as implied by the Latin word ‘matrimonium’ which is derived from ‘mater’ (mother). Marriages prevented just any prick from coming along and asserting rights to the property of a man he may claim to call “daddy.”

But marriage has changed over the centuries, as it should, since it was created to fill a societal need – not a religious one – and marriage must adapt to society’s ongoing needs. Marriage serves society, not the other way around. A new need has arisen in our time – the need for legal, governmental recognition and protection of two people of the same gender. Religion has absolutely nothing to do with that.

Yet the biggest opponent of gay marriage is you guessed it – the church.

Interference by the God Squad

The Bible doesn’t approve of the pushing of the poo or drinking out of the furry cup and since religion (Catholicism specifically) has its hooks into the whole marriage deal in a big way, by supporting gay marriage it would seem like they were supporting homosexuality which would in effect contravene their petty beliefs. The worst thing about this is that it wasn’t until the 12th Century that Roman Catholic theologians and writers referred to marriage as a sacrament, a sacred ceremony tied to experiencing God’s presence. So because some deluded old fart decided after three millennia of people marrying that all of a sudden it was an act intrinsically linked with the imaginary friend for adults, Toby and Steve are shit out of luck if they want to be recognised by society as life partners, same for Rhonda and Vivian (token names for homo’s and lesbo’s courtesy of www.queernamegenerator.com)

Pressed on why they believe gay marriage to be wrong, the churchies come at it from a few angles. Firstly, it’s morally wrong. Probably not as wrong as allowing priests to sodomise choir boys for hundreds of years and spending considerable effort in covering it up so the abuse can continue though, huh? For another, it’s against God. What, the same God who made dudes in biblical times kill their sons to prove their belief in him? The same God that will apparently cast me into the fires of hell for eternity because I don’t believe in him, yet will send some filthy paedophile off to heaven for orange mocha frappucinos because he suddenly “finds” God and repents before he croaks? Would be a shame to upset that righteous fellow now wouldn’t it? And lastly, the religious folk don’t agree with homosexuality because apparently it’s “unnatural”. Considering that both humans and animals of the same gender have been fucking one another well before religion came along, I know which of the two I find to be a bit out of the ordinary.

So why are gay people so keen to get married? I mean sure marriage has a few perks but personally I don’t think that’s what it’s about. It’s more so the human condition of always wanting what you can’t or don’t have. You have a nice Toyota but you’re dying to have a Porsche like your neighbours. You have an amazing girlfriend who loves you but you can’t stop thinking about screwing the arse off her hot best friend. The nice boy who’s keen on you gets treated like his name is Stanley, whereas you’d drop your panties in a second for the rude prick who isn’t interested in you in the slightest.

What’s so great about being married? It certainly doesn’t have much to do with the pursuit of happiness, my parents have been married almost forty years and they’re fuckin’ miserable! Shouldn’t gay people have the right to be just as miserable? Maybe the term “gay” (which used to mean happy once upon a time) was coined precisely because they were all just having a good old time living in sin and bumping uglies instead of arguing over what to watch on TV and waking up to screaming children on a Sunday morning! Maybe if we let homosexuals marry they’ll no longer be “gay” they’ll be “morose”. “Oh look at that morose couple kissing in public, how disgusting!” “I’m not homophobic at all, I have plenty of morose friends I’ll have you know”. Haha.

So while I don’t actively support gay marriage, I guess being a pro-choice kind of dude I’m for it. Hell, I’m even for marriage with animals and inanimate objects as well. If you want to marry a monkey and have monkey-human hybrid children that you train to be your monkey butlers and serve you cold beverages while you live in the trees, that’s your prerogative. If you want to engage in holy matrimony with a handsome Rhododendron plant and get sap everywhere – go nuts.

Until your chimp bride bites me and gives me Rabies or your plant husband starts shedding leaves on my lawn that I have to rake up, then I’m happy for people to do whatever it is they wanna do. 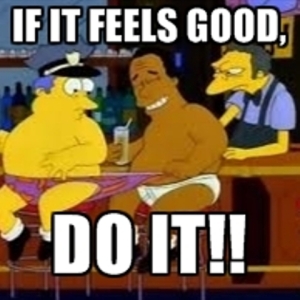 2 thoughts on “Buying the Cow”